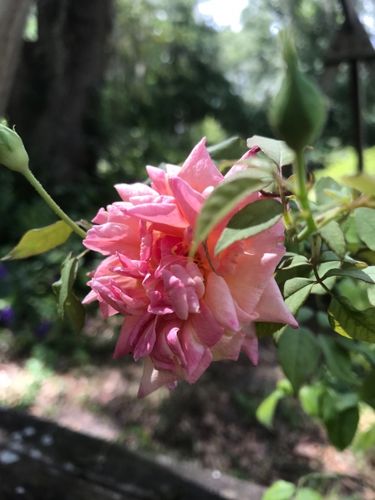 The amazing story behind this rose as written on HMF, "Once, upon spying a very nice and ancient Tea rose growing out of an overgrown hedge on the border between a property and the road, I stopped and asked if I could take cuttings. The owner refused. I was stunned, as the rose was completely neglected and swamped by brambles. “Why not?” I asked. The owner replied sharply that in this life, one had to pay for things. “OK” I replied, “I will happily pay you for some cuttings.” But the owner just said “No” and walked away. A couple of weeks later, I rode up and grabbed a few cuttings, riding away with the owner running after me. The rose was growing within 1 metre of the highway, so officially it wasn’t on her property anyway. The original plant has now been grubbed out by the owner but the cuttings all took. This I have christened “Laujuzan Tea”.

Don't forget to click on the green HMF circle to be whisked away to all of the information you could imagine about this particular rose.